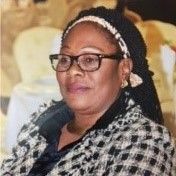 Grace Njapau Efrati is an active member of the community who is strongly committed to an equal and fair society for all. She is also an accomplished politician and entrepreneur who served as a Member of Parliament.

Honourable Grace Njapau-Efrati has held several prominent national leadership positions including being nominated and appointed Deputy Minister of Home Affairs by His Excellency President Levy Mwanawasa in 2006, and a member of National Security Council committee, which was headed by His Excellency of the Republic of Zambia.

Honourable Grace Njapau-Efrati held several positions and led significant initiatives for the betterment of her country Zambia and Southern Africa.
Honourable Grace Njapau Efrati, attended meetings on border conflicts such as Zambia-Malawi and Zambia-DRC in her capacity as Deputy Minister of Home Affairs during her tenure of service and a member of Joint Permanent Commission (JPC) headed by Ministry of Foreign Affairs.

Her dynamic career culminated in her being nominated for the prestigious Women Entrepreneur of the Year Award by the Zambian Federation Association of Women in Business in 2013 and many more international awards.

Grace Njapau Efrati has gone on to represent Zambia internationally within Global Development Forums including Petitioner on decolonization debate at the United Nations in Fourth Committees in New York in 2017, 2018, 2019 up to now 2021 and guest speaker on women and youth empowerment at the Crans Montana Forum, Dakhla, Morocco 2018, and in 2019 participated at Women Entrepreneur on Women’s Rights in Geneva, Switzerland as one of the guest speakers.

Recently, Grace Njapau Efrati has represented Zambia in the BPW and Africa Business Council in Verona, Italy. The list is endless.

Grace Njapau Efrati is a businessperson holding notable high-level positions such as: