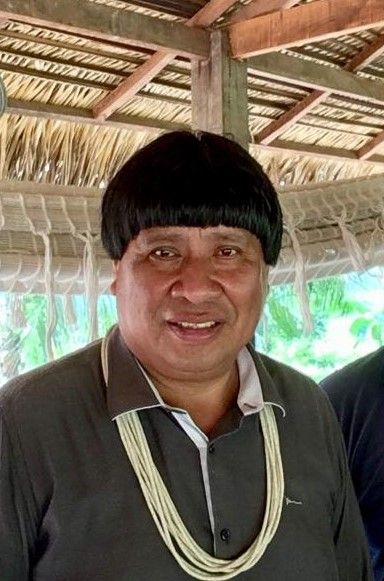 Chief Henrique is the head of all twenty six Paiter Surui tribes. He is of the Gameb clan. The 26 tribes control 248,147 hectares of tribal territory in the states Rondônia and Mato Grosso in Brazil.

Chief Miguel is chief of one of the 26 clans. He was chosen to represent the Paiter Surui at the Chicago Responsible Jewelry Conference through a vote which included every member of all twenty six tribes.

Chief Lucas is from a northern state in Brazil called the Alto Rio Negro.

The Surui people are one of the first indigenous people of South America to use high-tech tools (in particular Google Earth) to manage their land and protect their resources while also achieving economic benefits from them. They work with Google Earth Outreach to surveill satellite photos, which helps them manage large tracts of difficult-to-travel-to land and address suspicious activities.

They use the technology to identify threats and refer cases to government authorities, who help them remediate problems. Satellite pictures show that this has been highly effective. The Suruí territory is the only intact remaining piece of rainforest in the area.

The Surui have recently launched a forest carbon project as part of their 50-year tribal management plan. Beginning in 2007, the project aims to reforest and protect Surui lands for future health. A 2010 legal opinion [ref] established that the Surui own the carbon rights to the territory, which set an important precedent for future indigenous-led carbon projects in Brazil.

Their project has now gained verification through the Verified Carbon Standard (VCS) and Climate, Community and Biodiversity (CCB) Alliance as a REDD+ project. In September 2013, the Surui Forest Carbon Project transacted its first sale of 120,000 tons of carbon offsets to Brazilian cosmetics firm Natura Cosméticos. [ref] The project is designed to sequester at least five million tons of carbon dioxide over 30 years while protecting critical rainforest habitat. Profits from the sale of credits will be used as part of the 50-year tribal management plan.